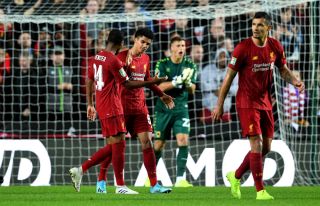 A much-changed Liverpool side eased past MK Dons and into the fourth round of the Carabao Cup.

Jurgen Klopp altered his entire starting line-up for the trip to stadium:mk as Harvey Elliott became the youngest player to start a competitive match for the club.

The 16-year-old put in an accomplished display and twice hit the crossbar as James Milner profited from terrible goalkeeping from Stuart Moore to put the Reds in front before Ki-Jana Hoever wrapped up a comfortable 2-0 victory.

A solid performance from the Reds and we progress to the @Carabao_Cup fourth round 🙌— Liverpool FC (@LFC) September 25, 2019

Paul Tisdale – who took Liverpool to a third-round FA Cup replay in 2016 when in charge of Exeter – saw his MK Dons side, showing five changes of their own, create plenty of chances but lacked the cutting edge to truly threaten Liverpool’s progression.

Despite the Premier League side enjoying plenty of early possession, it was the hosts who missed the first clear opportunity on the evening.

Liverpool failed to clear their lines after a ball was played into the box and Conor McGrandles took advantage but could only fire his shot over the goal of debutant Caoimhin Kelleher.

At the other end, there was a glaring miss for Elliott, who could only turn the ball onto the crossbar from close-range as Milner’s cross picked out the youngster free at the back post.

The same pair combined on 25 minutes but this time it was Elliott floating a ball in for Milner, whose diving header flashed wide of the post.

The next man to squander a glorious chance for Klopp’s side was Rhian Brewster – another debutant – who failed to make telling contact to turn home a cross from six yards.

Liverpool would take the lead four minutes before the break, Milner’s tame shot seemingly heading straight for Moore to make a routine save, only for the goalkeeper to fumble over his line as his desperate lunge back towards his goal was not enough to keep the ball out.

Elliott, unperturbed by his earlier miss, was looking sharp whenever in possession and shot into the side-netting soon after the interval.

At the other end, recalled Dejan Lovren did well to block a Sam Nombe effort behind before Jordan Bowery saw his scuffed effort hit the base of the post as MK Dons pushed for a leveller.

Instead, the record MK Dons crowd of 28,521 saw Liverpool double their lead as full-back Hoever marked his first start for the club with a powerful header from Milner’s cross.

Bowery drew a smart stop out of Kelleher before Alex Oxlade-Chamberlain hit the post as the tie started to open up in the latter stages.

Kelleher would save well from Bowery once again as the young goalkeeper kept out a close-range header, Lovren then clearing a George Williams effort off the line.

Elliott curled a fine shot against the crossbar in stoppage time as he came within inches of marking his debut with a goal as Liverpool advanced with ease.