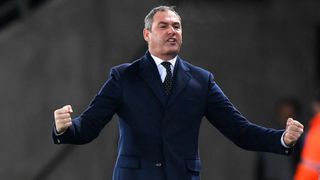 The Welsh club climbed off the bottom of the Premier League table thanks to Wilfried Bony's 81st-minute goal, the striker ramming home a loose ball at a corner to secure three precious points.

Clement - who made four changes to the side that lost 2-1 at Stoke City last time out, including leaving out Renato Sanches completely - felt his players deserved to triumph in a battle between two struggling sides.

However, with a midweek game against Manchester City up next before a busy festive period, the Swans manager knows they must build on the result as they fight to avoid the drop.

"It was a really important result. As everyone knows we have been struggling for form and performances and results have not been good enough. The players have given everything today," he told BBC Sport.

"There has been frustration in the club that we have not performed how we are capable of. But we did what was needed to be done.

"The timing of the goal put us in a great position. We are happy to have a win because it seems some time since we have had one.

"It's an important win for everybody. I go into my job the same every week with good prep from Monday to Friday. Now it's time to move on and this has to be a springboard.

"We have a difficult test against Manchester City, the best team in the league, but there are points up for grabs so let's see what we get. Man City is a big ask, then it's Everton and Palace, games which are maybe more realistic."

The result leaves them outside the bottom three only on goal difference - and their new manager suggested there could be changes for their upcoming fixtures against Liverpool and Manchester United.

"It was so tight. It was really nip and tuck everywhere on the pitch," Pardew told West Brom's official website.

"I thought Swansea had the better of the first half and in the second half I think we should have scored a goal as an away team. We had three or four great opportunities on the break and we didn't have the conviction to find the right moment.

"We've now got two huge games, difficult games as we know. There might be a different look to us in terms of trying to win those games. Sometimes the Premier League can surprise you and that's what we've got to try and do."