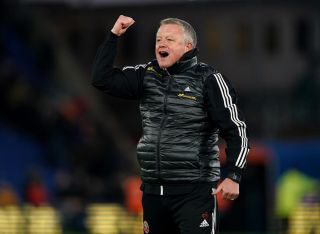 Sheffield United have been a revelation this season. Many tipped them for an immediate return to the Championship following promotion but the club’s first top-flight campaign for 12 years has been a resounding success so far.

Here, the PA news agency takes a look at some of the reasons why the Blades are exceeding expectations.

Every single player knows their job in this Blades team, making them very well organised. They have conceded just 24 goals in 25 games, with only runaway leaders Liverpool letting in fewer in the Premier League so far this season.

Defensively they have been so resilient. Wilder’s side have faced just 87 shots on target, which is the fourth lowest in the top flight and, on a per-shot basis, again only Liverpool have been harder to score against. The Blades have faced 12.4 shots per goal conceded.

Attack from the back

Playing five at the back enables wing backs George Baldock and Enda Stevens to attack from wide positions and get plenty of crosses into the opposition penalty area.

Stevens in particular has been a threat down the left, creating 27 chances in the Premier League so far. Before this weekend, only four defenders – Trent Alexander-Arnold (65), Lucas Digne (55), Andy Robertson (32) and Cesar Azpilicueta (28) had produced more.

Wilder was eager to get Dean Henderson back on loan from Manchester United over the summer, following his impressive performances last season as the Blades won promotion, and it is clear to see why.

The promising 22-year-old has kept the joint-most clean sheets of any goalkeeper in the Premier League this season with nine. Henderson has made 63 saves from 84 shots on target faced, equating to a save percentage of 75 per cent – with only Alisson (87.2 per cent) and Hugo Lloris (79.5 per cent) having better statistics.

Wilder’s side play some good football but they are not afraid to do the ugly side of the game too. They are joint-fourth in the Premier League for yellow cards, which shows they are competitive and fight hard.

The Blades have also made 294 interceptions and produced 268 successful tackles in just 25 matches, ranking third and sixth respectively in the Premier League, while the victory against Bournemouth was the ninth time they have salvaged something from a match after falling behind.

⚔️ @SheffieldUnited have scored 6️⃣ goals via substitutes this season – more than any other club#SHUBOUpic.twitter.com/URnPP13G33— Premier League (@premierleague) February 10, 2020

John Lundstram climbed off the bench to score United’s winner on Sunday and it was the sixth time this season that a substitute had netted for the Blades, which is more than any other club in the Premier League.