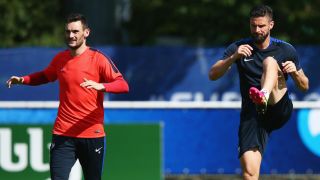 Chelsea striker Giroud will attempt to shatter the World Cup dreams of his club team-mate when their two nations meet in a blockbuster semi-final in St Petersburg on Tuesday.

Both shot-stoppers enter the match in fine form, Courtois starring in Belgium's 2-1 quarter-final upset of Brazil while Lloris produced a stunning stop to help preserve a clean sheet in France's defeat of Uruguay.

Giroud, who is yet to open his account at this year's World Cup, acknowledged the physical differences between the pair but joked they do have one thing in common.

"They have the same right foot," he told reporters on Sunday. "They don't use it much.

"Thibaut has an impressive wingspan. It's hard to beat him on the sides. He can stop balls in any area.

"I have scored a few goals against him in training with Chelsea and I hope I can do it on Tuesday.

"They're both great keepers. And they both deserve to be elected as best keeper of the tournament, even if I have a preference for Hugo.

"The best is Hugo. Sorry Thibaut."

Courtois boasts two clean sheets from five matches in Russia while Lloris has two in four.