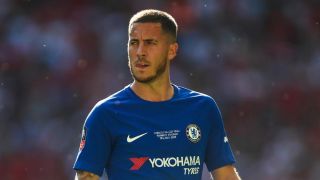 Maurizio Sarri wants to keep Eden Hazard and is looking forward to working with him at Chelsea, cooling speculation linking the Belgium international with a move away from Stamford Bridge.

Hazard has been the subject of media reports suggesting Real Madrid are interested in taking him to LaLiga before the start of the 2018-19 season as a replacement for Cristiano Ronaldo, but Sarri indicated the 27-year-old is very much in his plans.

He also compared Hazard with Napoli attacker Dries Mertens, who became one of the Partenopei's most prolific goal-scorers under Sarri's guidance during the last three years.

"Hazard is a very high level player and I think one of the top two or three European players," Sarri told reporters.

Sarri says Eden Hazard is one of the top two or three European players and he is looking forward to having fun working with him in training and on matchdays. He hopes to improve our Belgian, which he says will be difficult considering he is already at such a high level! July 18, 2018

"I hope that I will manage to improve him. This is very difficult given he has reached a very high level.

"With Mertens it's different. Dries had always been an external striker. Everybody thinks that by necessity he reached a very high level.

"But we are talking about two very high level players. Dries started from lower level. I hope I will improve Hazard too but this is difficult."

Sarri was asked about a number of players linked with moves away from Chelsea and he made it clear that shipping big names out of the club was not on his mind.

The 59-year-old was appointed as Antonio Conte's replacement on Saturday and started working with the players at Chelsea's Cobham training ground this week - without a number of squad members who were recovering after playing at the World Cup.

"I would like to keep them in my squad," he said, when asked about potential approaches for the club's top players.

"A telephone call without looking them in the eyes will not give me any certainty. I would like to meet these players face to face and talk to them and understand what will be best for everyone.

"Before that I would also like a player to come on the pitch for four or five days with me."