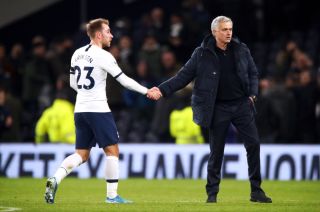 Jose Mourinho says Inter Milan have yet to bid for Christian Eriksen and that the midfielder will play against Watford on Saturday.

Reports suggested the Denmark international, who is in the last six months of his contract, was close to a move to the Serie A side, with his agent in Milan to broker a deal during the current transfer window.

Mourinho, though, said Spurs have not even received an official offer as the situation looks set to rumble on.

“You have to ask the agent and Inter Milan because they know more than me,” Mourinho said.

“So when I see people speaking, especially people with responsibilities speaking about it, I am a little bit surprised. That’s all I can say.

“I think it’s normal that until January 31 his brain is not totally in focus. I think it’s a normal consequence of the situation.

“I think it’s normal that a player doesn’t know very well what is going on, but I still don’t understand that optimism because, in this moment, for a few matches people are speaking about is Eriksen going?

“Eriksen played his last match for the club, and the situation didn’t change, Eriksen plays tomorrow.”

New signing Gedson Fernandes could also play at Vicarage Road following his loan move from Benfica this week and Mourinho is hopeful of doing more business before the end of the month.

A striker is on the top of his wish list following the potential season-ending injury to Harry Kane.

“Lots of names are coming and the majority of them are coming by players’ entourages, agents, people that want to put players’ names in the market,” he said. “Do we need a striker? Yes, if possible yes.

“But it has to be a positive situation for us, so in this moment we have these attacking players that of course are very good: Son (Heung-min), Lucas (Moura), (Erik) Lamela, (Giovani) Lo Celso, Dele Alli. Of course they’re very good but we miss that target man.

“So if it’s possible then we are doing everything possible. It’s not easy but we’re trying to add players to the squad.”

Another piece of business Spurs will be trying to do is turn Giovani Lo Celso’s loan into a permanent deal.

Spurs have an option to buy him for £27.2million during this window, a price that will go up to an obligatory £34million in the summer.

“I imagine yes, I think it is something that comes from the summer,” Mourinho said when asked whether a purchase could happen. “I think Giovani is going to stay with us.

“There are some loans that have the opportunity to be in control of the situation like is happening with Gedson.

“There are some emergency loans and there are other loans where the objective is to be in control of the future of the player without any need of further negotiations.”

Spurs have received some more good news after Hugo Lloris returned to first-team training following a three-month absence with a dislocated elbow which required surgery.

Mourinho expects the club captain to be back by the early part of next month.

“So the normal thing is February,” he said. “If you ask me late February or early February, at this moment I go more for early.

“Things are going well. He’s getting his confidence back, he’s training so I would say he’s one of our new players in the January transfer window.”

Ben Davies (ankle) and Tanguy Ndombele (hip) are nearing a return but will not be fit for the lunchtime clash at Vicarage Road. Kane (hamstring) and Moussa Sissoko (knee) are long-term injury victims.