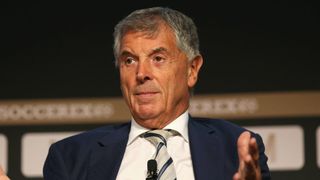 David Dein cautiously avoided sharing his opinion on Arsene Wenger's future as he reflected fondly on Arsenal's Invincibles side of 2003-04 on Wednesday, joking that he would like to see that squad back at Emirates Stadium.

Wenger weathered a storm of criticism to agree a new two-year deal in May, despite the team failing to qualify for the Champions League.

But of the Premier League's established heavyweights, the Gunners have been deemed 2017-18's early crisis club, a chaotic end to the transfer window having been followed by a thumping 4-0 loss away to direct rivals Liverpool prior to the international break.

Alex Oxlade-Chamberlain was allowed to move to Anfield and Wenger failed to complete a late swoop for Monaco's Thomas Lemar, with the expected sale of the unsettled Alexis Sanchez to Manchester City falling through as a consequence.

Speaking at a Soccerex event on Wednesday to mark 25 years of the Premier League, former Arsenal vice-chairman Dein, who left the club in 2007, steered a cautious path through a minefield of divided loyalties as he indulged the audience with recollections of the remarkable team that went unbeaten en route to the title in 2003-04.

"It was just fantastic," he said. "It was poetry in motion.

"We had world-class players in every position. Jens Lehmann, Sol Campbell, Ashley Cole, Dennis Bergkamp, Thierry [Henry]. They had such confidence in themselves.

"In 2014, I was hosting a dinner at the World Cup in Brazil. Gilberto Silva and Edu were my guests. I said to Gilberto, 'what was it like playing in the Invincibles team?'

"He said to me, 'Mr Dein, I've thought about this and I'll give you an example'. And he stood up for this.

"He said to me, 'when we were in the corridor waiting to go out on the pitch, we would all be in a line, with Patrick Vieira first, then Jens Lehmann, then Thierry [Henry], then Kolo [Toure].

"'We would see the opposition opposite us. Patrick, just before it was time to go out, would give a knowing nod to Thierry and then it would pass down to Jens and to Kolo. We'd all give a nod and know we're going to do it today, we're going to beat the opposition. We would turn around to the opposition and see the sense, almost, of fear in their eyes. We just felt the confidence'.

Dein added: "And from game to game, they didn't feel they were going to get beaten."

Pressed tentatively on Arsenal's diminished circumstances, Dein quipped: "We'd like that same squad back again, if you don't mind."

As for the divisive subject of the future of Wenger, he replied: "That's a loaded question, because whatever I say, it'll make headlines tomorrow.

"All I will say is he's got a love affair with the club."

Sharing the stage in Manchester with Dein was Kolo Toure, a proud member of the Invincibles with first-hand experience of playing in one of Arsenal's greatest sides.

"It was unbelievable, I was so lucky to be part of this team, to be able to play with such players, I learned a lot from them," he said.

"They are great guys, we were a family. It was an amazing time.

"Training was really hard, we had fantastic players all over the pitch, training was harder than some games. It showed the strength and quality of the squad.

"For me, Bergkamp is the best I played with in my career, he's incredible, I have no words to be honest, I have good memories, we used to go for dinner together.

"Vieira used to organise parties in his house, we were always together, not only on the pitch.

"Because we were so close we were able to fight for each other, back each other up, going to battle for them, we used to love each other.

"That was the best thing that ever happened in my career."