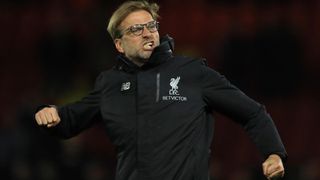 A stunning first-half bicycle kick from Emre Can was eventually decisive in a 1-0 victory that consolidated third spot for Liverpool in the Premier League.

But they almost gave it up late on when Sebastian Prodl struck the crossbar, a moment that had Klopp worried.

"The situation tonight, we'd already defended it and then they had three players at the second post.

"What can you say? We tried everything for 97 minutes, but if you want [we made] this one mistake and it could've led to a goal – that's how football at the highest level is.

"We didn't play perfect, but it would've been really hard to accept. But we got them [the points] and I think the boys really deserved it."

Liverpool pushed four points clear of fifth-placed Manchester United with their win, although they have played a game more.

They have home matches against Southampton and Middlesbrough either side of a trip to West Ham to finish their campaign.

Klopp said: "We have pressure, yes – but pressure in the end of the season, in this period, means you fight for something.

"We don't expect for a second that it will be easy. If anybody here thinks we already have the three points against Southampton then you could not have seen Southampton this season because they are a really strong side. It will be another hard game for us, but it is like it is.

"Tonight, nobody can take these points away from us, so that's the best news and now we have time to work and prepare for the Southampton game."