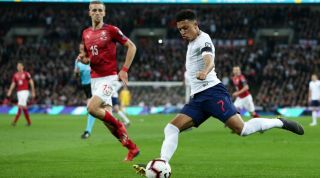 Manchester United will have to fend off interest from ambitious big-spenders Paris Saint-Germain if they are to land teenage sensation Jadon Sancho this summer.

Sancho’s club Borussia Dortmund have reportedly already slapped a hefty £70 million price tag on the winger – a number that could continue to rise after nabbing an assist in his first competitive start for England last night.

And with cash-rich PSG in the hunt, according to The Sun, Dortmund will know they can continue to push up the price, to Manchester United’s dismay. The French champions, who were knocked out of the Champions League by United earlier this month, have a history here – they splashed out €145 million on a teenager in 2017 when they signed Kylian Mbappe, who has proved a hit in Paris.

However, the Reds will be heartened to hear that Sancho – who only turns 19 on Monday – is privately believed to prefer a move back to England.

The news will be an embarrassment across Manchester, though – United’s rivals Manchester City allowed Sancho to leave for a fee of £8 million in 2017.

REVIEW How did Jadon Sancho fare on his first competitive England start?

Missed Sancho on the cover of March’s FourFourTwo? Pick up your copy here – then subscribe for less than £4 an issue!