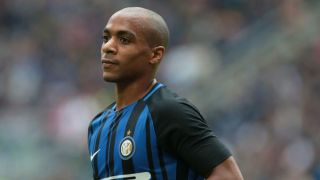 Joao Mario expressed his delight with Inter's strong start to the Serie A campaign, after he played a key role in their 2-0 victory over SPAL.

The former Sporting CP midfielder was brought down just inside SPAL's area 22 minutes in, and though the referee initially awarded a free-kick, the official overturned that decision with the use of the VAR system to give a penalty.

Mauro Icardi stepped up to convert, and although SPAL pressed hard for an equaliser, Ivan Perisic's late volley wrapped up a third win from as many games for Luciano Spalletti's side, and Joao Mario is hoping to build on the positive start.

"It was a difficult encounter against an organised outfit. They troubled us at times but it was important for us to win," he told the InterChannel.

"We must thank our fans. They were marvellous and they gave us a lot of energy. We are happy to have secured this victory for them.

"We've started the season well and this is very positive. The personal objective is to always keep doing more. We have a lot of quality within the side and I want to always give it my all."

Meanwhile, SPAL boss Leonardo Semplici has no doubts that Inter - under the tutelage of former Roma boss Spalletti - can once again challenge the domestic dominance of Juventus.

"Inter will challenge for the Scudetto, but I still have to compliment my lads for their performance. I tip my hat to Luciano Spalletti, who is both a friend and a great coach," he told Sky Sport Italia.

"We caused Inter problems and had a few chances to score too, but I think if we play like this, we will ensure our Serie A safety."