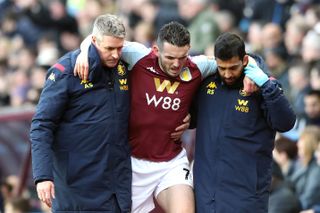 Aston Villa will have John McGinn available as they kick off the Premier League restart against Sheffield United.

The midfielder fractured his ankle in December but is in contention, although boss Dean Smith is wary of rushing him back given the hectic schedule in the next few weeks.

Striker Wesley and goalkeeper Tom Heaton will not be available for the final nine games as they continue to recover from long-term knee injuries but Jed Steer is fit after an Achilles injury.

Sheffield United have everyone available for the trip to Villa Park.

The Blades have had a full squad training over the last few weeks, with the three-month break allowing any niggles to pass.

Wilder is hoping to confirm the loan extension of Dean Henderson in the coming days, though the goalkeeper will be eligible to play at Villa Park anyway.