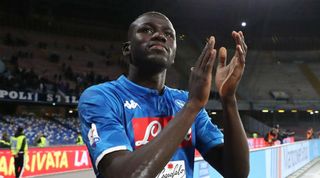 United made Harry Maguire the most expensive defender of all time when they signed him from Leicester for £80m at the start of August.

And the Red Devils attempted to pair the England international with Kouliably in the heart of their defence.

But Napoli, who are desperate to keep hold of their leading defender, turned down the bid.

Real Madrid and Barcelona have both been linked with Koulibaly this summer, but the 28-year-old now looks set to stay at the Stadio San Paolo.