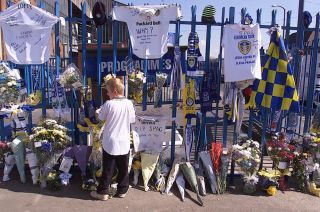 Leeds midfielder Kalvin Phillips led the tributes on the 20th anniversary of the murder of two of the club’s fans.

Christopher Loftus and Kevin Speight were killed in Istanbul on April 5 2000, on the eve of Leeds’ UEFA Cup semi-final first leg against Galatasaray.

Leeds have remembered the two men every year since and, at the nearest game to the anniversary, fans spend the first minute with their backs to the play in memory – an act they first performed at the Galatasaray game itself when no official minute’s silence was held.

With the families unable to congregate at Elland Road as usual due to the ongoing coronavirus pandemic, current player Phillips represented the club by laying flowers at the ground.

Nigel Martyn was Leeds’ goalkeeper that night in 2000 and wrote on Twitter on Sunday that playing the game was “my biggest regret in football”.

“Absolute tragedy,” he added. “Went to watch their team and were taken from their families.”