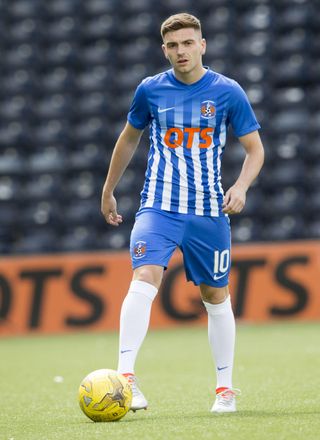 Greg Kiltie is determined to force his way back into the Kilmarnock team after rediscovering his consistency at Dunfermline.

The 22-year-old has been recalled from a season-long loan at East End Park by new Killie manager Alex Dyer.

The attacking midfielder scored three goals in 16 appearances for the Pars after netting six times in a three-month spell with Morton in the second half of last season.

Kiltie told Killie TV: “I went through a stage where I didn’t play much through injury, so I am happy I have got about 30 games in between the two loans and it shows I am fighting fit and hopefully ready to come back in.

“My first spell I scored more goals without being consistent, but this season I have definitely had consistent performances and played on the left and through the middle.

“My main focus is to get myself in the team, playing every week, so hopefully I can show the manager what I can do.”

James Fowler, the club’s head of football operations, added: “He’s been able to get some good game time under his belt, which is what we were keen to get him.

“Stevie Crawford’s been great for him, I’ve watched him a few times at Dunfermline and so many of his performances have been positive.

“He’s coming back to work hard, impress the manager, and show what he can do.”