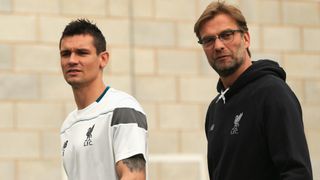 Liverpool manager Jurgen Klopp endorsed Dejan Lovren's assessment of himself as one of the world's top defenders despite joking it was hardly an objective opinion.

Croatia mainstay Lovren raised eyebrows during the week when he claimed he deserves to be considered among the game's finest in his position.

The 29-year-old pointed to his parts in Liverpool's qualification for the Champions League final and Croatia's run to the World Cup decider as evidence of his ability.

Klopp concurred with the assessment, although he admitted it was perhaps not Lovren's call to make.

"Yes. It would be better if somebody else would say that and not Dejan! But actually he's right," Klopp told reporters.

"People don't think about that, but if you go into detail it's not a big surprise that [Croatia] are where they are. They don't have world class full-backs, but in the end they don't concede.

"They are offensive in the midfield with [Ivan] Rakitic, [Marcelo] Brozovic, [Luka] Modric, so somebody needs to fix all that. Dejan is a big part of that.

"For me it's no surprise. He played a really good World Cup, but to do it consistently is more important. We will work together for a long time, so I will have the opportunity to help him. Next time I will say it."

Klopp feels the intensity of training in the last few days meant were not able to muster a performance worthy of a victory in today’s goalless draw.Klopp on Bury draw, Curtis Jones and Lallana's form: July 14, 2018

Talented young Wales winger Harry Wilson has been ruled out of the trip as he nears an expected loan move to Derby County.