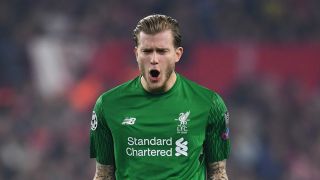 Loris Karius will continue as Liverpool's first-choice goalkeeper after he was preferred to Simon Mignolet for Sunday's undulating 4-3 win over Manchester City.

Alex Oxlade-Chamberlain, Roberto Firmino, Sadio Mane and Mohamed Salah were all on target as Premier League leaders City were defeated in the top flight for the first time this season.

Karius did not cover himself in as much glory as his attacking counterparts, with Leroy Sane blasting past him at the near post to send City in level at half-time, while late strikes from Bernardo Silva and Ilkay Gundogan meant the 24-year-old German was beaten by three of the four shots on target he faced at Anfield.

Nevertheless, he appears to have done enough to earn an extended run in the side – the latest blow to Mignolet's up-and-down career at Liverpool.

"Yes, he is the new number one," Klopp told DAZN.

"With goalkeepers you have to commit yourself, in other positions you can change, as you want, and we do now - Loris is now in it."

Addressing Karius' performance against City, Klopp pointed out his opposite number Ederson – widely lauded for his performances since moving to the Premier League from Benfica – endured a moment to forget when he was caught hopelessly out of position on Salah's goal.

"Yes of course it's the corner where he was. You showed it to me. People always find the hair in the soup. Loris knows it," he told Sky Sports.

"The Man City goalkeeper probably caused Salah's goal and he is still a world-class goalkeeper. But nobody will talk about that."