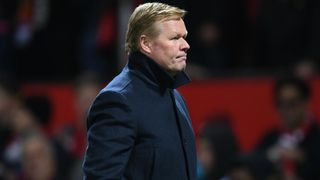 Ronald Koeman admits he has a lifelong ambition to become head coach of Barcelona.

The Everton boss is one of the names to have been linked with Camp Nou following the news that Luis Enrique will step down at the end of the season.

The former Netherlands star won four LaLiga titles and the European Cup during six hugely successful years with Barca, and although he remains committed to Everton, he would not hide the fact that a return to Catalonia would be "a dream".

"I'm flattered and pleased that they think about me," he told Sport.

"Everyone knows that I'm Barca, they know my love for a club where I grew up as a player and as a person.

"In my professional life, I have two dreams left to accomplish. One: to coach the national team of my country, Holland. I've had the chance but my commitment to Everton prevented me.

"My other wish, my other dream, is to coach Barca one day. That's the truth.

"Now, I'm committed to Everton. We have a very powerful and exciting project and we'll strengthen as best we can to reach the Champions League next season."

Koeman also ruled out the prospect of taking over at Real Madrid, such is the strength of his attachment to Barca.

"That's impossible. I'd never coach Madrid, although I respect them as a team and an institution," he said. "Someone for whom Barca means so much, with their history, could not do it."