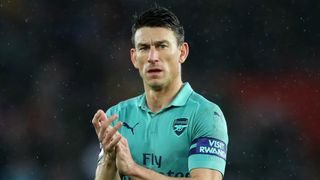 Arsenal were handed another defensive setback after Laurent Koscielny withdrew from the FA Cup tie at Blackpool with a suspected back complaint.

Former France centre-back Koscielny returned to action last month after a ruptured Achilles tendon ruled him out of his country's World Cup triumph.

The injury he suffered during the warm-up at Bloomfield Road appeared nowhere near as serious but added to an unhelpful injury list for head coach Unai Emery.

Rob Holding will miss the rest of the season with knee ligament damage, while Shkodran Mustafi, Hector Bellerin and Nacho Monreal are also currently sidelined.

Late changes to our squad for tonight's game...