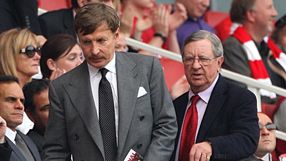 The 64-year-old American billionaire, whose portfolio of teams includes the St Louis Rams in the NFL, the Denver Nuggets in the NBA and the Colorado Rapids of Major League Soccer, has also been Arsenal's majority shareholder since earlier this year.

Nicknamed "Silent Stan" by the British media, he finally spoke in depth for the first time since he started buying into Arsenal four years ago with an interview in the Daily Telegraph.

Despite the club's poorest start to a season since 1953, and some fans calling for the 61-year-old Wenger to leave, Kroenke gave the Frenchman a stunning endorsement, 15 years to the day he was appointed manager.

"Arsene is one of my favourite people I have met in the last 20 years. He is a great person and I love the way he handles himself. He is one of the great managers," he said.

Asked if he could stay at the club for another decade, Kroenke replied: "With Arsene, it his decision and only he will know that."

Arsenal have improved in recent weeks but they have not won any silverware since the FA Cup in 2005 and lost two of their most influential players in the off-season when Cesc Fabregas joined Barcelona and Samir Nasri went to Manchester City.

Kroenke, said the decision to allow Fabregas and Nasri to leave was Wenger's, who believed, particularly as far as the former was concerned, that it was right to let him to return to his boyhood club after they had courted him for three years.

"That was between Arsene and him," the American added. "I like the kid but I'm not going to change his mind.

"Arsene made the decision. If we wanted to be really hard about it, we could have done, but Arsene believed that it was the right way to do it.

"I also get it on Nasri. If we didn't do something on Nasri people would be looking at us next summer and saying, 'Why didn't you do this?'

"We bought in a lot of resources that we can use on other players. I honestly didn't make the decision on Nasri.

"Of course the board talks about these things but at the end of the day, that's for Arsene."

Kroenke has little fear that Wenger's current crop of youngsters will do well, adding: "Maybe it is one of those times when we have to work our way through, maybe with some young players.

"Arsene has been really good at developing these guys, people like Alex Oxlade-Chamberlain and Jack Wilshere.

"There are some really good players that Arsene thinks can be special. Sometimes you go through periods like that.

"Arsene's our man. As an owner, that's who we put our confidence in."

There has been widespread criticism of Wenger for not spending money on top quality players, but Kroenke said that in his three years on the board, he has supported considerable investment in the squad.

"We are not only developing money on players. If you look at the total wage spend, we are up ther