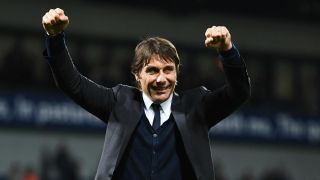 Former Chelsea star Frank Lampard has warned that the Premier League champions will face "a big test" to continue their dominance next season.

The Blues claimed a second title in three seasons on Friday after their 1-0 win away to West Brom ensured that they cannot be caught by second-place Tottenham in their final three matches.

The triumph marks a stunning debut campaign in England for head coach Antonio Conte, who can still claim the domestic double should Chelsea beat Arsenal in the FA Cup final.

Lampard, however, says fans should not forget their dismal title defence under Jose Mourinho last season and expects Chelsea's title rivals to put up a stronger fight in 2017-18.

"It will be a big test next year," he told Sky Sports. "It's the second season, and the formation won't be a surprise. The players will be a second season in and we saw that last season they couldn't sustain it for a second year.

"And all the other teams behind, other than Tottenham, have been disappointing, and they will be back stronger."

CHAMPIONS !!! Words can't describe the emotions right now! We did this together! Family! May 12, 2017

Conte has now won a league title in each of his last four seasons as a head coach at club level, having claimed three Serie A wins in a row with Juventus from 2012 to 2014.

The former midfielder has been heavily linked with a move back to Italy, with Inter reportedly ready to make him the world's highest-paid coach, but Lampard hopes he stays to build a "dynasty" at Stamford Bridge.

"If you're a Chelsea fan that's what you're hoping for now," said the former England midfielder. "The way he's held himself this year and the results have been different class.

"N'Golo Kante is the player of the season, Eden Hazard was close, but the man of the season is Conte. He is the boss, he has driven them from 10th last year to make them champions and in the end it has been pretty comfortable.

"I think he's going to be backed in the summer, and he does need backing. It's a great squad of players they've got there but maybe there will be a freshening up, don't lose your best players and add one or two at the top end to go into the Champions League."

Captain John Terry has now won five Premier League titles and Lampard believes he will be a huge loss for the dressing room when he departs at the end of the season.

"If he's going to leave, this is the year to do it,'' Lampard said. "He hasn't played a huge part on the pitch, but the part he's played behind the scenes, I know for a fact, once he goes, everyone will appreciate him even more.

"Someone has to take the mantle now. He's such a big miss for them. Gary Cahill, maybe he'll step up even more now, but John Terry is so important for this club.''