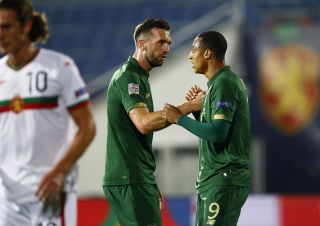 Captain Shane Duffy left it late to ensure Stephen Kenny’s big night did not end in defeat as the Republic of Ireland fought back to secure a 1-1 Nations League draw in Bulgaria.

Kenny’s first game in charge looked destined to end in a disappointing defeat until central defender Duffy, who this week sealed a loan move to Celtic from Brighton, headed home his fourth international goal in the third minute of stoppage time in Sofia.

In the process, he cancelled out Bozhidar Kraev’s 56th-minute opener at the Vail Levski Stadium, and will have been relieved to do so having had to take a share of the blame for it.

It was no more than Ireland deserved on a night when a new-look side promised much but looked set to come up short as they began their preparations for next month’s Euro 2020 play-off in Slovakia.

There were some nice touches and impressive link-up play from 19-year-old debutant Adam Idah, while fellow former Under-21 international Aaron Connolly and Callum O’Dowda caused problems for the Bulgarians.

The new manager’s team selection instantly confirmed his stated intention to play a more progressive brand of football, and he did not shy away from big decisions as Tottenham new boy Matt Doherty got the nod ahead of skipper Seamus Coleman at right-back with Idah and Connolly also included.

There was a start too for Crystal Palace midfielder James McCarthy, his first international appearance since a World Cup qualifier in Moldova almost four years ago following a dreadful run of injuries.

Kenny’s men were perhaps fortunate to escape when defender Kristian Dimitrov was allowed to meet a 10th-minute free-kick with a glancing header, but it was Dimitrov who was heaving a sigh of relief within minutes when he gifted the ball to Connolly, who shot wastefully across goal from a tight angle with both Idah and O’Dowda better placed.

Ireland were enjoying the better of the game without creating chances despite Connolly and O’Dowda seeing encouraging amounts of the ball, and were working hard to pin the Bulgarians back deep inside their own half for long periods.

However, they were almost caught when, after Doherty’s 29th-minute through-ball had been picked off, full-back Anton Nedyalkov delivered a fine cross-field pass into the path of Todor Nedelev, who lifted his shot high and wide.

Doherty was unable to make meaningful contact with Conor Hourihane’s inviting, but half-cleared, cross four minutes before the break, and O’Dowda could not direct Enda Stevens’ driven ball at goal after good work by Jeff Hendrick on the stroke of half-time.

Randolph comfortably fielded Galin Ivanov’s speculative effort seconds after the restart, and then had to dive to his left to claim Nedelev’s swerving 50th-minute free-kick as Bulgaria flexed their muscles.

Georgiev had to keep out Connolly’s effort two minutes later after he had been flicked through by Idah, but it was the home side who made the breakthrough 11 minutes into the second half.

Nedelev was allowed time and space to slide a pass between central defenders Duffy and John Egan for Kraev to stab a shot through Randolph’s legs.

McCarthy, O’Dowda and Idah made way for Robbie Brady, Callum Robinson and Shane Long as time ticked down, although Bulgaria substitute Birsent Karagaren might have doubled his side’s lead.

But it was Duffy who rescued the Republic at the death when he rose to thump a downward header into the net from Brady’s injury-time corner to snatch a draw.