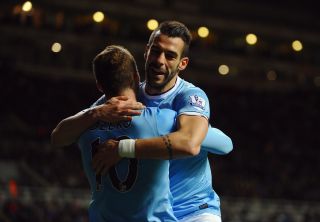 Four-time Cup winners United progressed to the final eight via Tuesday night's 4-0 win over Norwich City, and will travel to Stoke City, whom they defeated 3-2 in the Premier League on Saturday.

Manchester City will travel to Leicester City, the only non-Premier League outfit left in the competition, after they beat Newcastle United 2-0 following extra time on Wednesday.

Chelsea, meanwhile, will visit either Sunderland or Southampton on the road, after Jose Mourinho's side booked their place in the quarters with a 2-0 success at Arsenal.

The final tie of the round sees Tottenham Hotspur face West Ham United at White Hart Lane, as Andre Villas-Boas' side overcame Hull City 8-7 on penalties after the game had finished 2-2 after 120 minutes.

West Ham fans will be hopeful of a repeat of their recent Premier League fixture, when Sam Allardyce's side came away from Spurs' home ground with a 3-0 win.