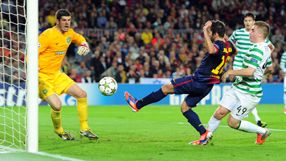 Judging by a series of stirring fightbacks, including Tuesday's 2-1 Champions League home win over Celtic, Vilanova's players have lost none of the hunger Guardiola instilled in them during his spectacularly successful four years in charge.

Barca had to come from behind to beat Spartak Moscow 3-2 at home last month and Jordi Alba's 94th-minute winner against Celtic put them five points clear of the Scottish champions at the top of the group after three of six matches.

They also rallied to win at Sevilla and Osasuna in La Liga, reversing a two-goal deficit for a 3-2 success in Seville, and both Vilanova and sporting director Andoni Zubizarreta paid tribute to that fighting spirit.

"This is a team that keeps trying until the end, until the very last minute," Vilanova told a news conference.

"It's not easy when the other team's 10 outfield players are all in their penalty area defending," the 44-year-old added.

Zubizarreta added in an interview with Spanish television: "This is a team that wants, that desires, that tries and it's something to feel proud of.

"We had several chances to score before and when [David] Villa hit the post in the last minute you thought that was it. But these players always have something in reserve."

The other side of the coin is that Barca's unusually leaky defence is shipping the goals that force them to chase games in the first place.

Part of the reason is that Spain centre backs Carles Puyol and Gerard Pique have been sidelined by injury but there have also been some disturbing lapses and goalkeeper Victor Valdes is not looking as solid as he has in recent years.

Barca have already conceded 11 goals in eight La Liga games this season, including four in Saturday's action-packed 5-4 victory at Deportivo La Coruna, while they let in only 29 in 38 matches last term.

"Well, people said before that we were boring to watch," Vilanova said. "Now we are not boring anymore."

Vilanova deployed Marc Bartra at centre back against Celtic alongside converted midfielder Javier Mascherano and the 21-year-old produced a solid performance suggesting he could be a long-term replacement for Puyol, who will be 35 in April.