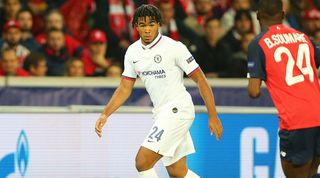 Leeds United reportedly planned to sign Reece James and Daniel James if they gained promotion to the Premier League at the end of last season.

Derby County defeated Leeds United in the semi-final of the playoffs and consigned the Yorkshire club to another season in England's second tier. Marco Bielsa's side now once again sit in the promotion places and are widely regarded one of the favourites to go up this season.

They'll be hoping their recruitment staff are doing as good a job as they were last season. Leeds' scouting set up had already identified targets for the club to go after if they gained promotion to the top flight.

First on their radar was Chelsea youngster Reece James, according to The Athletic. James had a barnstorming season on loan at Wigan last season and was even given the captain's armband in his last game at the DW Stadium. 19-year-old James is now making waves at Chelsea, impressing in the games he's featured in, especially in the Europa League.

Leeds were reportedly ready to make a move for the Englishman if they secured promotion.

Another name on Leeds' list was Daniel James, the then Swansea winger whose pace and dribbling skills were hard to miss. It was, however, Manchester United who secured the Welshman's services, as Leeds looked on from the Championship.