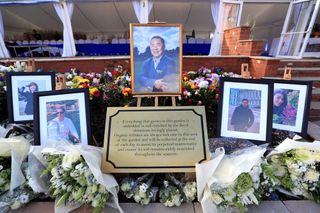 Leicester have opened the Vichai Srivaddhanaprabha Memorial Garden a year on since the helicopter crash which claimed the life of their former chairman.

Srivaddhanaprabha and four others died when their helicopter came down outside the King Power Stadium following a 1-1 draw with West Ham 12 months ago.

Hundreds of fans came to pay their respects at the King Power Stadium on Sunday afternoon after a private ceremony for club staff.

Khun Vichai’s son Top, who is now the Foxes’ chairman, was in Thailand with his family at a King Power ceremony.

Chairman of the official supporters’ club Cliff Ginnetta told the PA news agency: “It’s a tranquil corner where anyone can go and sit and reflect. They’ve got it right again.

“He turned up many years back and transformed not just the football club but the thinking of the city.

"All he ever asked from us was to fight, that was the only thing he ever said – keep fighting right until the end, whatever the result will be, it will be." – @kschmeichel1— Leicester City (@LCFC) October 27, 2019

“It’s a tribute to what he’s done. When he took over we were all ‘who is this guy?’ but they came in and slowly transformed it.

“They looked into the traditions and history of the club and worked alongside it.

“It was such a dark day and credit to his family, they have carried on. In tragic circumstances you could lose some of that fight and enthusiasm but they’ve carried on in his name.”

Jamie Vardy helped plant flowers in the garden last week while there is a bronze bust of Khun Vichai’s dog, Hero, and a floral tribute from West Ham.

The garden, located on the accident site in the south-east corner of stadium, is an all-season garden including flowers and features of significance to Khun Vichai and the Srivaddhanaprabha family.

The thousands of floral tributes left since the accident will also be composted and used to support the garden’s growth.

The club still intends to incorporate the other tributes – shirts, scarves and flags – into the planned redevelopment and expansion of the stadium.

Left-back Ben Chilwell also dedicated Friday’s record-breaking 9-0 win at Southampton to Srivaddhanaprabha, writing on Twitter: “That one was for the boss.”

Srivaddhanaprabha bought the Foxes in 2010 and they won a shock Premier League title in 2016.

Brendan Rodgers’ side are third in the top flight after their thrashing of Southampton, the biggest ever away win in the Premier League and equalling Manchester United’s record 9-0 victory over Ipswich in 1995.

The Air Accidents Investigation Branch also released an update on their progress on the anniversary of the tragedy.

Chief Inspector of Air Accidents Crispin Orr said: “Today marks the first anniversary of the helicopter accident in Leicester, in which five people lost their lives.

“Our thoughts are with all those affected by this tragedy.

“All parties involved in the investigation continue work to fully understand what initiated the failure of the duplex bearing and to develop any additional safety actions.

“We expect to publish our detailed final report next year.”