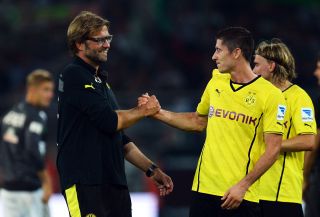 The Poland international has scored 78 goals in 144 games for Dortmund since signing from Lech Poznan in June 2010, catching the eye of many top clubs in Europe.

Lewandowski hit the headlines last season, netting all his side's goals as they thrashed Madrid 4-1 in the UEFA Champions League semi-finals, with the striker revealing that the Spanish club's president Florentino Perez had asked him about a potential move to the Bernabeu after his stellar performance.

"It was in the office near the dressing room at the Bernabeu straight after the match," he said. "We spoke to each other briefly and let's just say we spoke.

Dortmund ultimately lost the Champions League final to Bayern Munich, also finishing well behind the Bavarians in the Bundesliga.

Lewandowski is expected to move to the Allianz Arena when his Dortmund contract expires at the end of the season.

However, he is determined to bring success to Dortmund before he leaves, and has also rejected advances from two Premier League clubs in order to do so.

"Yes, there was a situation like this with Jose Mourinho but I wouldn't like to talk about it much," he added.

"It was a private conversation so I don't want to make big things out of it. I can confirm I spoke to him.

"We spoke a few times before. I have his number in my phone. It is a huge compliment for me that a manager with such a big name is texting me this way.

"It is always nice to talk to him but it is not the first time I had such a situation.

"One year earlier I also spoke to Sir Alex Ferguson and that was definitely a great feeling.

"The retirement of Sir Alex didn't affect my decision not to come to England. He spoke to me one year ago. It was not at a good time.

"I knew I still had something big to achieve in Dortmund before I joined a bigger club."

The uncertainty over Lewandowski's future has not affected his performances so far this season, with three goals from five games for the 25-year-old.