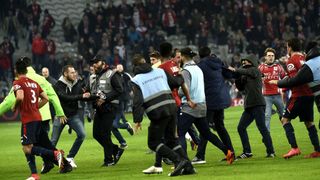 A large number of fans from behind one of the goals burst over the advertising hoardings and ran towards the centre of the pitch, with security personnel outnumbered.

Nicolas Pepe, who earlier gave Lille a 41st-minute lead, found himself accosted by some of the invaders and was shepherded towards the dressing rooms.

Pepe's team-mates similarly sought refuge and the marauding fans, who appeared to number around 200, turned their frustrations towards the directors' box, with owner Gerard Lopez and sporting director Marc Ingla looking down upon the ugly spectacle.

"We understand the reaction but we can't accept that players have been attacked," Lille midfielder Yassine Benzia told reporters.

"There is a limit not to cross. I was already in the locker room but the group is quite young and some players were scared."

Despite much pre-season enthusiasm due to an overhaul over seen by Lopez and Ingla, Lille have struggle badly this term and languish in 19th place in Ligue 1.

Lille against Montpellier was the second match on Saturday in one of Europe's major leagues to be marred by severe fan unrest, with West Ham supporters repeatedly entering the field during their 3-0 Premier League loss to Burnley as protests against the club's board turned violent at London Stadium.