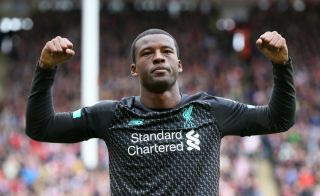 Liverpool manager Jurgen Klopp took a tongue-in-cheek swipe at title rivals Manchester City by claiming he would rather win eight matches 1-0 than beat a side 8-0.

The Reds scraped past Sheffield United by the slenderest of margins at Bramall Lane after a tough encounter against Chris Wilder’s side.

With City having blown away Watford 8-0 last weekend Klopp was asked how it important it was to be able to grind out 1-0 wins, a victory which made it seven out of seven in the league this season and keep them well clear of Pep Guardiola’s team.

“Eight times 1-0 is more important than one times 8-0 but if you give me a guarantee for it, I take the next eight games,” said the Reds boss.

“We are very critical for ourselves. I said before, is it allowed that Sheffield United fight more than us? No it isn’t.

“Is it allowed they run more? No. We can play better. I don’t think we had an off-day.”

In truth Liverpool laboured for 70 minutes and it required a huge stroke of luck courtesy of Dean Henderson’s handling error to make the breakthrough.

The on-loan Manchester United goalkeeper was left embarrassed after allowing Georginio Wijnaldum’s shot to slip through his hands and then his legs before creeping over the line.

It allowed Liverpool to extend their winning run to 16 league matches but Klopp knows they were fortunate.

“We had our moments and we started well but then lost the rhythm. It was really difficult, we didn’t accelerate in the right moments. Our passes had not the right speed,” he added.

“All respect to Sheffield United, they did really well over 95 minutes. They have a proper basis to be a really uncomfortable opponent.

“We still had big chances. Unlucky for Sheffield United. If it had been a draw, I would say that is what Sheffield deserved and we deserved.

“I don’t think we deserved to lose. We got three points and we are pretty happy.”

Blades boss Wilder had little sympathy for his goalkeeper Henderson and insisted it had been an opportunity missed by his side.

Asked whether Henderson, 22, on his second season-long loan with the club from Manchester United, would learn from his error, Wilder said: “I’m not really interested to be honest with you.

“He knows what we think about him and how much we respect and rate him, but he has to find a way himself to get over disappointment.

“He has done in the past and he will do in the future, but I’m certainly not going to put my arm around him and rub his head, as I’m not with all the players.

“We set a high bar. They all know whay they’re coming into and there’s no hiding place.”

Wilder, whose side slipped to their third league defeat since winning automatic promotion, felt they deserved at least a point.

“I don’t think there’s a big enough word to say how much we are frustrated about this afternoon,” he added.

“We did enough to get something out of the game. I totally understand Liverpool weren’t at their best.

“When these unbelievable sides have slight off-days we have to capitalise and we didn’t.

“Norwich did three weeks ago at home to Man City, three shots, three goals. We’ve had double that and I feel their opportunities came through our mistakes.

“If we had showed a little bit more quality in both boxes we would have been talking about not only hosting the European champions, but beating them.”