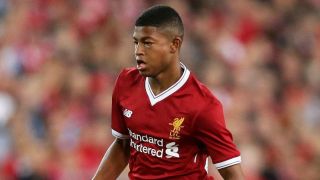 Liverpool are considering selling Rhian Brewster and inserting a buy-back clause into the deal, according to reports.

The London-born youngster is tipped to have a bright future at Anfield, and the Reds were initially expected to loan him out for at least part of the upcoming campaign.

Brewster shone at Swansea in the second half of last season, scoring 11 goals in 22 appearances in all competitions for the Championship side.

Liverpool are yet to bolster their attack with new signings this summer, but Brewster is still expected to find game time hard to come by at Anfield.

The reigning Premier League champions will only let the striker, who they signed from Chelsea at the age of 14, join a club that will give him regular minutes.

And according to Sky Sports, Liverpool are open to selling him on a permanent basis if they can include a buy-back clause in the deal.

PREVIEW How does Jurgen Klopp improve on Liverpool's brilliance?

Newcastle have made an enquiry about Brewster’s availability, but Liverpool do not want him to move to St James’ Park as they are unsure how often he will play.

The Magpies are one of six Premier League sides that are said to be interested in the 20-year-old, who has made four senior appearances for Liverpool.

Aston Villa, Sheffield United and Brighton are three of those clubs, but Liverpool have not yet made a decision over what they will do.

They may ultimately opt to hold on to Brewster until the January window, just as they did last term.

And after his involvement in the Community Shield against Arsenal last month, Brewster may even hope to make his Premier League debut when Liverpool take on Leeds this weekend.

Marcelo Bielsa’s side travel to Anfield for the late kick-off on Saturday, with the Reds then set to face Chelsea the following weekend.