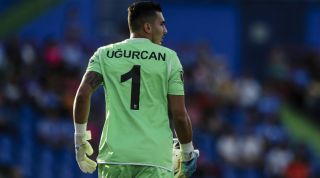 Adrian was needed not long after arriving when Alisson suffered a calf injury on the opening day of the season.

The Spaniard covered dutifully but was never tipped to supplant the Brazilian number one, who was voted the best keeper in the world last year.

Now it seems Liverpool are in search of a younger deputy for Alisson, someone who can learn from him as well as stand-in when needed.

According to the Metro, that goalkeeper could be Trabzonspor stopper Ugurcan Cakir.

The 23-year-old made his debut for Turkey's national team last year against rivals Greece.

Cakir is reportedly valued at £15m and club president, Ahmet Agaoglu, has claimed Liverpool have made an offer.

"There are offers for Cakir, we continue to receive offers. It’s been said Liverpool have made an offer," said Agaoglu.

"So a team that is undefeated in the Premier League wants my keeper. In other words Liverpool’s goalkeeper is in my goal."

Liverpool have long been linked with Cakir and it appears Trabzonspor won't make it difficult for a deal to be done.

Minamino made his debut against Everton in the FA Cup third round on Sunday.

Jurgen Klopp has hinted that Minamino will be the only incoming this window, but time will tell.

John Barnes interview: "It's too early for Liverpool to target the double"