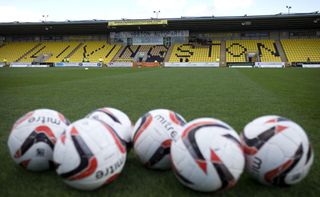 Livingston insist Hampden bosses will have their backing no matter what decision they reach on how to finish the season.

The Scottish Football Association and Scottish Professional Football League have called a halt to domestic action in response to the coronavirus crisis – but have yet to explain what they plan to do if the campaign cannot be completed.

Celtic boss Neil Lennon has already demanded his team are crowned Ladbrokes Premiership champions on the basis of average points.

But Rangers managing director Stewart Robertson says the Ibrox outfit will insist the season must be played to a conclusion, while Hearts have threatened legal action if they are relegated without kicking another ball.

However, the Lions – who sit fifth, six points off the European slots with eight games left – say now is not the time for squabbling.

In a statement, Livi said: “Whichever course of action the SFA and SPFL decide to take, they will have the full support of Livingston FC as it’s during this time of national emergency that we all need to pull together.

“No outcome is going to suit everyone but as a club, we’ll support whichever option the governing bodies opt for.”

🆕| Whilst we appreciate that everyone is experiencing their own uncertain circumstances at present, we thought we’d keep you updated on our own position as things stand.— Livingston FC (@LiviFCOfficial) March 19, 2020

Livi chiefs have kept a skeleton staff on at the Tony Macaroni Arena but the stadium is now closed to the public.

Gary Holt’s first-team staff have also been told to stay away having been issued with individual training programmes to work on at home.

For now the club are pouring their efforts into ensuring they can stay afloat during the shutdown, but bosses believe their plans to wipe out the club’s current debts can be salvaged.

“With no real idea of how long this shutdown is going to last, it will definitely be a testing period for the football club,” added the statement. “There is a huge sense of frustration as the club has picked up momentum over recent years, with success on the park allowing the business to improve generally.

“Over the past 18 months, we’ve been able to clear off historic debts and loans in the region of £350,000 through agreed debt sacrifice and repayments.

“We will continue to strive to further reduce historical loans to get us to a position of being fully solvent.

“This has been fundamental to our business model of removing director/creditor loan accounts in order to reach the ultimate goal of being debt free. That was already a huge challenge, but even in the current climate, we believe we can remain on track.

“We’re incredibly fortunate to have the support and backing of our chairman (Robert Wilson) and chief executive (John Ward) at this time, both of whom have been quick to ensure that funds are available if the club reaches a stage where we do need to take advantage of their generosity.

“Naturally, those funds aren’t bottomless though and with a top-flight playing squad, coaching team and non-playing staff to support, challenging times lie ahead – but that is something we are aware of.

“We’d like to reassure all of our extended Livi family that the club is working tirelessly behind the scenes to put in place ways of generating funds to help get us all through these difficult times. We’ve identified a number of avenues that we’ll progress over the coming days and weeks where fans and businesses, where possible, can help to support the football club.”