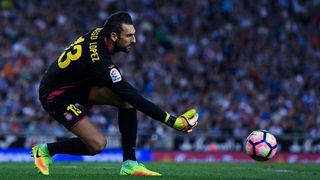 Espanyol have signed goalkeeper Diego Lopez on a permanent basis from AC Milan following a successful season on loan in LaLiga.

The 35-year-old has signed a three-year deal, tying him to Espanyol until June 2020, with a buyout clause of €50million.

"It's a very happy day for me. We've only had one season, but it's been wonderful," the former Real Madrid, Villarreal and Sevilla keeper told Espanyol's official website.

"I thank the club, the coach, the coaching staff, the team-mates and the fans, and I wanted to stay here, it was my priority."

Espanyol also announced Lopez will undergo surgery on Tuesday to alleviate a case of bursitis in his right knee.