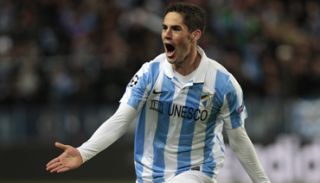 The 21-year-old midfielder, who was also a target for English Premier League club Manchester City, has joined from Malaga on a five-year contract, Real said on their website on Thursday.

He would have a medical examination and be presented at the Bernabeu stadium next Wednesday, they added.

Real did not divulge financial details but a Malaga spokesman said the fee quoted in local media of some 30 million euros was "more or less accurate".

Isco, whose full name is Francisco Roman Alarcon, spent several years at Valencia before returning to his native Malaga and has long been considered one of Spain's most promising prospects.

He helped Malaga to the Champions League quarter-finals last season and caught the eye with a series of scintillating performances at this month's under-21 European Championship in Israel.

He scored a penalty in Spain's 4-2 victory over Italy in the final and was voted player of the tournament.

"The ability to beat his marker, imagination and speed are some of the qualities that define this midfielder," Real said.

Isco had discussed the possibility of joining up with Manuel Pellegrini at City after the Chilean coach quit Malaga at the end of last season to move to Manchester.

However, Ancelotti will have the responsibility of making sure he fulfils his promise and helps Real to win the 10th European title that has eluded them since 2002.

Isco, who made his debut for the senior Spain side in a friendly against Uruguay in February, will compete for a place in the Real starting line-up with players such as Mesut Ozil, Kaka and Luka Modric.