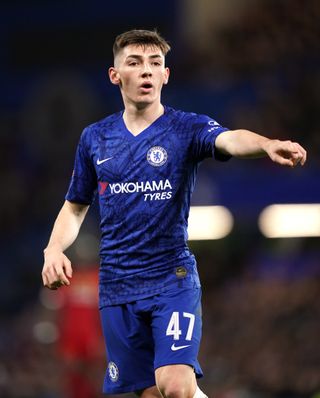 Billy Gilmour could be sidelined for as long as four months after knee surgery, Chelsea boss Frank Lampard has said.

The 19-year-old midfielder has enjoyed a fine breakthrough campaign at Stamford Bridge, but will not feature again this term.

The Scot started Chelsea’s 3-2 Premier League win at Crystal Palace on Tuesday, but was replaced in the closing stages by Jorginho.

Lampard revealed he told Gilmour to be proud of his first senior year in west London.

“Billy Gilmour has had an operation on his knee this morning, so he will be out we estimate somewhere between three and four months unfortunately,” said Lampard.

“I’m obviously very disappointed as we all are here and of course Billy himself.

“I spoke with him yesterday at length, and giving him support. He’s a tough boy, it hit him hard especially as a young boy who has just made a breakthrough.

“But I told him he should be very pleased with what he’s done and the impact he’s had this season anyway. His attitude will get him back as quickly as he can.

“His character for me is fantastic, particularly with his age, to get himself around the first-team squad and push himself into the team.

“I’m sure he’ll do everything right, put in the work and the rehab, and he has a very close-knit family around him who will help. But we’re his family too, so we’ll be there for him.

“Hopefully it will cover a period of the close season and into pre-season, so hopefully he’s not missing as many games as he might have done.”

Italy midfielder Jorginho could now step up to start his first match since football’s resumption in Sunday’s clash at Sheffield United.

N’Golo Kante will miss out again however due to a hamstring issue, while Mateo Kovacic will come back into contention after a knock.

Former Napoli player Jorginho is understood to be wanted back in Serie A by Juventus, and has found himself down the Blues’ pecking order since the league’s restart.

But Lampard insisted the 28-year-old has nothing to prove to anyone at Stamford Bridge.

“He proves it in training and when he plays for me. I hope there isn’t a point to prove as such, I just want to see the usual Jorginho.”

When asked whether Jorginho would be a Chelsea player next season, Lampard only added: “I keep getting asked about next season, but it’s irrelevant to me; these final few games will define how we sit and look at this season and look forward to next.”