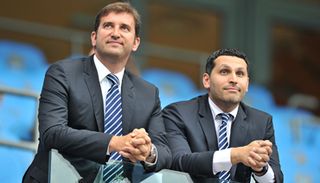 City sacked manager Roberto Mancini earlier this month, saying the club had failed to achieve any of its stated targets for the season except qualification for the Champions League and are expected to appoint Malaga coach Manuel Pellegrini.

"If we look at the next five years, I would say I want to win five trophies," City chief executive Ferran Soriano (pictured, left) was quoted as saying by British newspapers on Friday.

"That may mean we win no trophies one year and two in another, but on average I want one trophy or title a year.

"If next year we don't win, but progress our football and get to the semi-finals of the Champions League, finish second in the Premier League and lose the FA Cup final again, that will be fine," the Spaniard added.

In his three-and-a-half years with the club, Mancini dragged City out of the shadow of their more successful neighbours Manchester United and broke a 35-year-trophy drought, winning the FA Cup in 2011.

They won the Premier League title for the first time in 44 years in 2012 but amid media rumours of discontent in the dressing room, City's defence of their crown never really got off the ground this season.

They finished a distant second, 11 points behind Manchester United, were beaten by Wigan in the FA Cup final and went out of the Champions League in the group stage.

"Roberto Mancini did very good for the club. He changed the mentality, he changed it from a club that was not winning to a winning club and that is very hard," said Soriano, a former vice president at Barcelona.

Explaining the decision to sack the Italian, Soriano added: "In the last year I think it's fair to say that our football did not progress or evolve as we hoped. If you play good football you will win and we have a fantastic squad.

"The squad we have is capable of winning the Premier League and is not a squad that should be kicked out at the first group stage of the Champions League.

"You know, these things can happen - this is football and we all understand football. But we have better players than that."