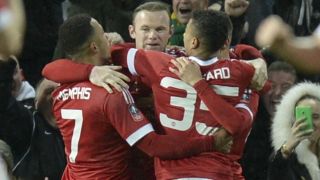 Manchester United will visit Derby County in the FA Cup fourth round after being drawn against the Championship promotion chasers.

Louis van Gaal's men needed a last-gasp penalty from Wayne Rooney to beat League One Sheffield United 1-0 in the third round following a performance that did little to ease the pressure on the Dutch manager.

And United are unlikely to have it all their own way at Derby, who occupy the second automatic promotion place in the Championship, four points adrift of leaders Middlesbrough.

Meanwhile, holders Arsenal, attempting to become only the third team to win the competition for three successive years, have been rewarded for beating Sunderland 3-1 with a home tie against Burnley.

Sean Dyche's side are also in the hunt for Championship promotion and are fifth in the second tier.

There could be another all-Premier League clash between Aston Villa and Manchester City if the struggling Midlands club can over Wycombe Wanderers having been held to a 1-1 draw by the League Two outfit on Saturday.

Chelsea are to travel to the winner of the replay between Northampton Town and MK Dons and either Leicester City or Tottenham will visit Colchester United.

Fourth-tier Oxford United have been rewarded for their shock 3-2 defeat of Premier League Swansea City with a tie against either Newport County or Blackburn Rovers, whose third-round fixture was postponed at the weekend.

The ties will be played over the weekend of January 29 - February 1.