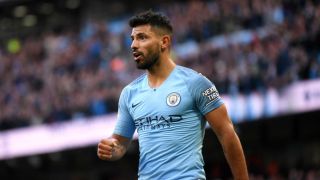 Sergio Aguero is playing through the pain of a foot injury as Manchester City enter an important week in their season, manager Pep Guardiola has revealed.

Aguero helped to create Raheem Sterling's opening goal in Saturday's 2-0 Premier League win over Brighton and Hove Albion before netting the second himself – embarking on a barrelling 65th-minute run and slickly exchanging passes with Sterling to finish.

The Argentina international made way to a standing ovation and an embrace from Guardiola shortly afterwards and the City boss is keen to manage his star striker's workload, with a crunch clash against title rivals Liverpool at Anfield to come on the back of Tuesday's Champions League trip to Hoffenheim.

"Sergio is struggling a bit with some problems in his foot," the former Barcelona boss told a post-match news conference, before explaining the complaint dates back to the win over Newcastle United that preceded the most recent international break.

"He's not 100 per cent. He's not recovered from what happened against Newcastle.

"We spoke about playing 55-60 minutes and we were lucky that he scored a goal in the right moment.

"We are controlling, fighting, but he needs time. Now we have two games left before the next international break.

"Hopefully he can do these two games and make a final recovery but he's not in his best condition right now physically because he has a problem with his heel."

Aguero signed a contract extension with City through until 2021 last week and brought up 300 appearances for the club with last weekend's goalscoring contribution in the 5-0 demolition of Cardiff City.

City's all-time record goal scorer now has 206 in all competitions.