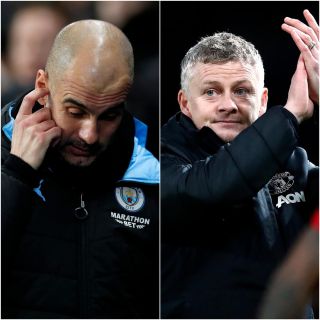 The last two weeks have seen Manchester’s Premier League rivals both lose games in which they dominated the shot count.

Manchester City were beaten 2-0 by Tottenham on Sunday despite taking 19 shots at goal to their opponents’ three – and have taken only one point against them this season despite a combined 49 shots to six across the two games.

United, meanwhile, had 24 shots to Burnley’s five in their 2-0 defeat to the Clarets at Old Trafford – but are the results part of a trend, or just curious outliers?

Of the 250 games played so far in this season’s Premier League, 186 have resulted in wins with 64 draws. Sixty-five of those 186 wins, 35 per cent, have been won by the team taking fewer shots – so it is by no means unusual to see a team upset the statistics.

Many of those are more evenly-matched but there have been plenty of huge upsets of the shot count – United took 22 shots to five when Crystal Palace won at Old Trafford in August, while City had 25 shots to seven in their 3-2 defeat at Norwich.

Chelsea had 19 shots to five in defeat to West Ham and 19 to seven against Newcastle, while also comfortably out-shooting United and Liverpool in defeats.

The most egregious example this season, though, was Sheffield United’s 2-0 win at Everton – the Blades took only two shots and benefited from Yerry Mina’s own goal, while Everton had 16 without success.

Chelsea have suffered as many such defeats this season as any club, with Everton, Bournemouth and Southampton also beating them with fewer shots.

Their total of seven is matched by the Toffees, who out-shot Aston Villa, Bournemouth, Burnley, Brighton, Norwich and Liverpool in defeat in addition to the Blades’ heist.

Southampton have suffered six shot-count upsets and City and United five each – United also had more shots in defeats against West Ham, Bournemouth and Watford but did turn the tables on City, who suffered the same fate against Wolves and Liverpool.

Bournemouth, a recurring name in those lists, match Burnley for the mosts wins while being out-shot with seven apiece. The pair maybe took that to heart when they met on December 21 – Burnley won 1-0 while taking two shots to Bournemouth’s three, with Jay Rodriguez scoring in the 89th minute from the only effort on target.

Liverpool, Newcastle and Sheffield United each have six such wins, with Jurgen Klopp’s side narrowly out-shot by Palace, Tottenham and Southampton in addition to the Chelsea, Everton and City games.

The Clarets have long had a reputation under Sean Dyche for defying the shot count, and that is borne out by the figures. Of his 52 Premier League wins with the club, they have been out-shot in 36 – more than 69 per cent.

The only current Premier League manager with a higher percentage is Newcastle’s Steve Bruce, who only took charge this season – the Magpies have been out-shot in six of his eight wins.

Chris Wilder’s Blades are not far behind with six of nine, while Southampton have had the fewer shots in more than half of their wins under Ralph Hasenhuttl – nine out of 17.

At the other end of the scale, Frank Lampard has often bemoaned Chelsea’s lack of killer instinct and with good reason – in seven of their eight league defeats this term, they had more shots.

Fifteen of City’s 18 losses under Pep Guardiola, and 17 of Liverpool’s 20 under Jurgen Klopp, have come while having more shots – records of 83.3 per cent and 70 per cent respectively. Ole Gunnar Solskjaer’s United follow with eight out of 13, or 61.5 per cent.