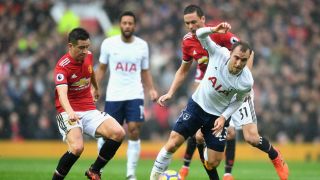 Manchester United can compete for the Premier League title should they replicate their performance in the victory over Tottenham against their other top-six rivals.

Matic was at the heart of a resilient display from the hosts, who hit the post through Romelu Lukaku just prior to Martial's winner, and having gone two league games without a win, the former Chelsea midfielder claimed a victory was vital to put United back on track for a title challenge.

"It was very important for us against a very good team - one of the best teams in the league.

"And thanks to Martial we managed to score and win a difficult game against opponents who were very good today.

"They had more of the ball in the first half but we had more clear chances than them. As I said they are great and play great football but the most important thing is the result and we managed to win.

"It's important to continue to win these types of games. We dropped points in the last game and against Liverpool so it was very important to win at home especially."

Overall, it was a game of few chances - with Dele Alli going closest for Tottenham before Lukaku's header struck the woodwork.

But Martial's introduction in place of Marcus Rashford changed the course of proceedings, and the France striker acknowledged that - after netting four goals from the bench this season - he is eager to start more games.

4 - Anthony Martial has scored more goals as a substitute than any other player in the this season. Cameo. October 28, 2017

"I don't want to be on the bench but Rashford has played good too, so the manager wants to try to give us a chance so we have to score and give assists.

"The manager told me to find the space. I know Romelu is good with his head and it was a good header so I found the space behind and managed to score."