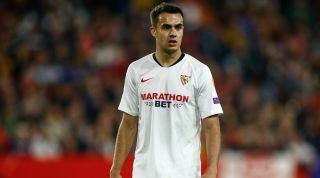 Manchester United are still keen to sign Sergio Reguilon this summer, but the deal could be scuppered by Real Madrid.

Ole Gunnar Solskjaer wants to add further strength in depth at left-back, with Luke Shaw having suffered with injuries over the last few years.

Brandon Williams enjoyed a promising breakthrough campaign last time out, but he is still young and relatively inexperienced.

Solskjaer has identified Reguilon as his leading target in that position, and Real Madrid are willing to sell the defender.

Reguilon spent last season on loan at Sevilla, where he impressed as Julen Lopetegui’s side won the Europa League.

And although he has since returned to the Santiago Bernabeu, Reguilon is available for transfer as Madrid have deemed him surplus to requirements for the time being.

However, the reigning La Liga champions want to insert a buy-back clause into a mooted £27m deal.

Madrid are keen to protect themselves in case Reguilon goes on to develop into a star at Old Trafford, and such clauses are common in Spanish football.

But according to the Daily Mirror, United are wary about entering into such an agreement with Madrid and talks have now hit a snag.

Solskjaer still wants to bring the 23-year-old to Old Trafford but he recognises the danger of Madrid having first refusal on the full-back.

That would deny United the chance to make a profit on the player should he be sold on in the future.

Donny van de Beek remains the Red Devils’ sole addition so far this summer, with the midfielder arriving in Manchester for an initial fee of £35.7m.

United’s business is not done yet, but the frustration they are experiencing with Reguilon mirrors that of the protracted Jadon Sancho saga.

Solskjaer’s side begin the new Premier League season against Crystal Palace on September 19.