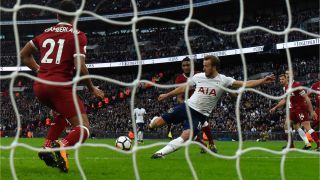 Harry Kane might be scoring goals for fun in the Premier League but the Tottenham striker was still on the receiving end of some finishing advice from Argentina great Diego Maradona at the weekend.

Maradona was a guest at Wembley on Sunday and looked on alongside former international team-mate and ex-Spurs manager Ossie Ardiles as Mauricio Pochettino's team thrashed Liverpool 4-1, with Kane scoring twice.

England international Kane now has 17 goals for club and country this season but a video posted on Tottenham's official Twitter page showed Maradona cautioning the 24-year-old against becoming too predictable in front of goal.

"Wow, what a goalscorer," Maradona said, as he was introduced to England international Kane and Spurs goalkeeper and captain Hugo Lloris.

"Mauricio has a real backbone in the team. Hugo stops everything at one end and Harry puts everything in at the other."

After wishing both men good luck for the game, Maradona added: "Oh, and Harry, don't always go near post with your shots. Go across goal sometimes.

"You know why? Goalkeeper watch you on TV all the time. So next time… across!"

Kane had no need to put Maradona's tips into immediate practice as he rounded Liverpool goalkeeper Simon Mignolet and kept his footing to steer home an early opener, while his second and Tottenham's fourth came on the rebound after Jan Vertonghen's 56th-minute effort was blocked.