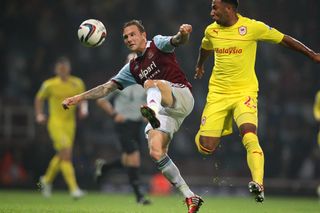 Former Premier League player Matt Taylor has confirmed his intention to retire from playing at the end of the current season.

The 37-year-old, who is currently with League Two Swindon, announced the news in a statement on his Twitter feed.

Taylor started his career at Luton and went on to play in the Premier League for Portsmouth, Bolton, West Ham and Burnley.

Taylor wrote: “After 20 years as a professional footballer, the time has come for me to retire at the end of the current season.

“I have loved every minute from leaving school at 16 years of age to pursue my dream and will look back on it all with the fondest of memories.”

After leaving Burnley in 2016, Taylor moved on to Northampton before joining his current club Swindon in 2017.