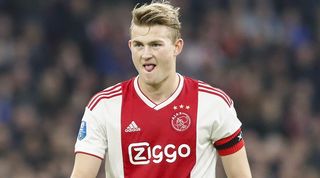 Manchester United remain in the race to sign Ajax defender Matthijs de Ligt, according to the Daily Telegraph.

The Ajax captain is one of the most in-demand players in Europe at present, having helped the Amsterdam outfit win a domestic double and reach the Champions League semi-finals this season.

Barcelona have long been leading the race for his signature, while Liverpool and Juventus have also been linked with the 19-year-old.

It was previously reported that United had lost ground in the battle to acquire De Ligt after failing to qualify for the Champions League.

However, the Netherlands international has not ruled out a move to Old Trafford and is said to still be interested in the possibility of joining United.

The news comes as a major boost to Ole Gunnar Solskjaer, who is keen to bolster his defensive options ahead of 2019/20.