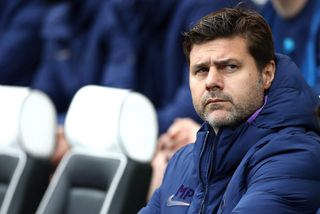 Tottenham boss Mauricio Pochettino says he is on board with the decision to allow documentary cameras to film inside the club this season.

It was announced on Friday that Spurs will be the subject of the latest Amazon series of All or Nothing – a fly-on-the-wall documentary that will focus on the current campaign.

The streaming service have chosen an interesting one to be around as Spurs’ horrible start continued as they laboured to a 1-1 draw with winless Watford.

Tottenham Hotspur is to be the focus of the latest Amazon Original docuseries All or Nothing, charting the Club's journey during the 2019/20 season.#THFC ⚪️ #COYS— Tottenham Hotspur (@SpursOfficial) October 18, 2019

Only Dele Alli’s late goal – his first since January – stopped them from suffering another embarrassing defeat.

Asked about his thoughts on the club agreeing to the documentary, Pochettino said: “Do you think it is a moment to talk about that?

“I am focused only in trying to stick with giving my best to turn the moment.

“That was a club decision to do a documentary about Tottenham and me as a manager I need to give my best to help the club to do what the club want.”

The cameramen could be in for a fascinating few months as Spurs try and turn things around.

That could mean January is a pivotal month and the Argentinian restated his position, having ruled out any dramatic changes only 72 hours ago.

“It is not the moment to talk, when the time arrives we are going to take that decision in one way or another.

“Now is the time to stay all together, all of the squad, with the staff and the fans and try and change the atmosphere.

“We are not going to get any benefit to talk about January, it is too far away, we have got a lot of games to play.

“Like always, what is going to happen in January I cannot guess today, what happens will happen.”

Watford, beaten 8-0 in their previous away game at Manchester City, were minutes away from a first win of the season and first of Quique Sanchez Flores’ second stint in charge.

Flores accepts he would have taken a draw before the match but was disappointed at coming so close to three points.

“We defended with a medium block and the team was really safe, playing on the counter-attack,” he said. “I saw many teams playing Tottenham: Newcastle and Southampton.

“Newcastle won here and we played much better than this team, but we just draw. Maybe we are realistic before the match, thinking to draw is a good result.

“Now we need to create a balance between the feelings about nearly winning and drawing. It is not too bad and we can improve. I know our players believe in their work.”