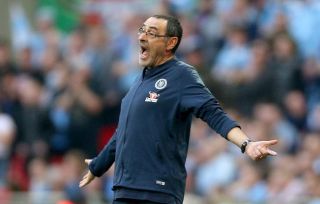 Maurizio Sarri has left Chelsea to take over at Juventus.

2 – finals contested by Chelsea last season, winning the Europa League but losing out to Manchester City in the Carabao Cup.

3 – they finished third in the Premier League, albeit 26 points behind champions City.

63 – games as Chelsea manager for Sarri in all competitions.

112 – the Blues’ goal tally across all competitions last season, conceding 58.

5-0 – Sarri’s biggest win as Chelsea boss, against both Huddersfield in February and Dynamo Kiev in March.

6-0 – his heaviest defeat, to City at the Etihad Stadium just eight days after the win over Huddersfield.

2 – he was the second successive Chelsea boss to win a trophy in his final game in charge – his predecessor Antonio Conte signed off by lifting the FA Cup.