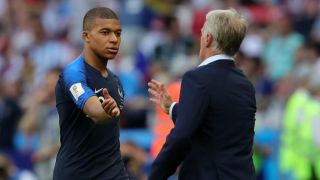 France star Kylian Mbappe is relaxed and ready to repeat his last-16 heroics in Friday's World Cup quarter-final against Uruguay, according to Hugo Lloris.

Mbappe scored twice and won a penalty in a devastating performance in the 4-3 win over Argentina in Kazan.

The Paris Saint-Germain forward's performance led to praise from across the footballing world, including from Brazil great Pele, who was the last teenager to score twice in a World Cup match back in 1958.

Lloris says his team-mate is well aware he needs to grasp his chance to impress on the biggest stage but does not think he has become burdened by expectations.

"He's the same old person, true to himself, he smiles, he's relaxed," he told a news conference in Nizhny Novgorod.

"He's a player with so much ambition, he has so much to offer his teams, be it PSG or France. He has a bright future ahead of him but he's also very aware that, when opportunity knocks, he needs to seize it and he's doing everything he can to not miss his chance here.

"He's ready to help the team. I think the entire world saw him shine against Argentina but he's very much focused."

Lloris also praised the growing maturity of midfielder Paul Pogba, who was quietly effective in the victory over Argentina last Saturday.

The Tottenham man thinks Pogba has become "a true leader" for the national team since they lost the final of Euro 2016 to Portugal two years ago.

"We all know he's extremely talented and he has a lot to offer the team and his team-mates. I think these competitions are good to show the talent of players and I'm sure that will be the case with Paul."

Uruguay striker Edinson Cavani is in a race against time to be fit for the meeting with Didier Deschamps' side, but Lloris thinks it would be wrong to underestimate their opponents if the PSG man does not start.

"Cavani has been a historical figure for PSG," he said. He's scored so many goals, he's a winner, he's a leader, he's very much respected in France as a player and a man because of his values.

"We're getting ready for anything, whether he plays or not, but we know others can play at a high level in his stead. It's true [Luis] Suarez and Cavani are one of the most beautiful attacking pairs.

"But I'm going to say again: Uruguay are a difficult team on the counter and difficult to come up against."