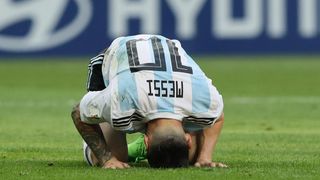 This was likely Lionel Messi's last chance to make an impression at a World Cup and to rise above Diego Maradona as the greatest to ever wear the Argentina shirt.

But in a sea of mediocrity he was a lonely shark, ultimately upstaged by the lethal Kylian Mbappe.

Argentina's World Cup campaign has been an unmitigated shambles, moving from one crisis to the next, eventually culminating in a 4-3 defeat to France in which their lone star was unable to shine.

Forced into a 'false nine' role by the surely doomed Jorge Sampaoli, Messi was improbably quiet throughout an enthralling contest as Argentina's spirit, gusto and fight could only take them so far – France's persistence ensuring they make it through to the last eight.

Sampaoli spoke a good game about Argentina being confident in his pre-match news conference, also appearing clearly aware of France's main strengths of physicality and speed.

For all his supposed confidence and assuredness regarding France's tactics, Argentina looked shockingly ill-prepared early on, as if the team were deliberately ignoring Sampaoli's plans, perhaps unsurprisingly given the mutiny reports.

Mbappe's pace was quickly identified as a real outlet for France against Argentina's bafflingly high defensive line – the young attacker tormenting the cumbersome core of Argentina's team with great frequency.

First, he darted through them, drawing a foul from Javier Mascherano that resulted in Antoine Griezmann striking the crossbar.

Then he just ran away from them, leaving Mascherano and company in his tracks before surging past Marcos Rojo and winning a penalty from the Manchester United defender that Griezmann coolly slotted home.

It was a chaotic start befitting Argentina's World Cup circus.

But, France took their foot off the pedal, the slack marking for Angel di Maria's gorgeous, goal evidence of that.

History then repeated itself right at the start of the second period.

The hopes of 45 million Argentinians have been on Messi's shoulders in this tournament, though even he couldn't have inspired more shambolic French marking – his tame shot deflecting off Gabriel Mercado in acres of space.

Granted, France needed a moment of pure inspiration from right-back Benjamin Pavard to kick-start the revival, but France were refocused and, remembering the joy they had in the first half when attacking Argentina, Mbappe struck through Franco Armani in the 64th minute.

4 - Lionel Messi is the only player to have delivered an assist in each of the last four World Cups. Divine. June 30, 2018

And then Argentina were sliced open with surgical precision in what will be one of the most impressively worked goals of the tournament – the sensational Mbappe finishing with aplomb.

Even with Sergio Aguero's late third, Argentina's last-ditch efforts were futile, each and every second probably bringing us closer to the end of Messi's World Cup career.

From talks of a mutiny, goalkeeping blunders, and head-scratching tactics – Russia 2018 has been an embarrassing rollercoaster ride for Argentina.

But more important than any of their mounting crises, the World Cup legacy of the greatest footballer of all-time will be failure.