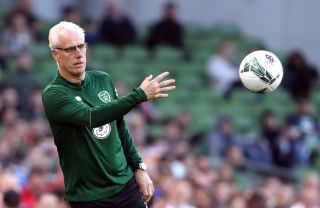 Mick McCarthy has warned the Republic of Ireland they have done nothing yet as they attempt to press their claims for Euro 2020 qualification against Group D favourites Switzerland.

The sides meet at the Aviva Stadium on Thursday evening with Ireland five points clear at the top of the pile after four games, but knowing the challenge becomes increasingly difficult during the second half of the campaign.

Narrow home and away victories over Gibraltar and three points from Georgia’s visit to Dublin coupled with a hard-fought draw in Denmark in June have left Ireland where they hoped to be, but McCarthy is under no illusions as to what lies ahead.

He said: “We’ve had a start where we had to get the points that we’ve got. Denmark was a bonus, but we had to get nine points from the other three games, the two Gibraltar games and Georgia here.

“We’ve got harder games to come, I’m under no illusions, and that starts on Thursday.”

Asked if he would take a point from the game now, he added: “I probably would, yes – not that we are going to try to get that, but bearing in mind the points that we have got already, if we remained unbeaten until the end of the time…

“They’re a good side, but we’re not setting up to get a draw, we’re going to try to win. But if it turns out we end up with a point, I’ll be happy at not being beaten.”

Switzerland will arrive in Ireland having collected four points from a trip to Georgia and their home clash with the Danes, in which they allowed a 3-0 lead to slip inside the final six catastrophic minutes to draw 3-3.

They will be without injured wing-back Steven Zuber and also Liverpool schemer Xherdan Shaqiri, who has made himself unavailable as he attempts to force his way into the team at Anfield.

However, McCarthy, who will himself have to do without the likes of Robbie Brady, James McCarthy, Harry Arter and Sean Maguire, knows the Swiss will be able to replace their absentees with able deputies.

Asked for his reaction to Shaqiri’s decision, he said: “It was a bit like when the draw was made and we didn’t get Holland and Germany, and we suddenly got Switzerland and Denmark.

“But if you are going to analyse a game and you are trying to counteract Shaqiri, I think it is pretty difficult to do that, because he can drift in and out of games and then he has that wanderlust. He wanders about the pitch and suddenly he explodes and he does something magnificent.”

MMcC: "I rate Switzerland and Denmark as the top two teams in this group and their UEFA rankings would ratify that…we've harder games to come."#IRLSUI#COYBIGpic.twitter.com/s7soDTnaIM— FAIreland ⚽️🇮🇪 (@FAIreland) September 2, 2019

Thursday night’s game could bring back unpleasant memories for McCarthy, whose first spell as manager of the national team ended with a 2-1 Euro 2004 qualifier defeat by the Swiss in October 2002, although he insists that will not play on his mind.

He said: “Does it bug me? I’ve probably had another 300 games since then and I’ve won, drawn and lost plenty.

“It would have been nice to leave on a win because I was going anyway after the Switzerland game, but it doesn’t bother me. It was 17 years ago.”