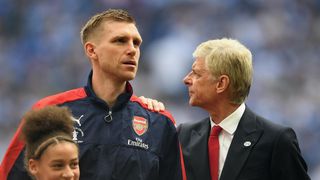 Arsenal captain Per Mertsacker has thanked Arsene Wenger for his support after the manager announced his decision to depart at the end of the season.

After months and years of speculation, Wenger will depart Arsenal in May after winning three Premier League trophies and seven FA Cups with the club.

And defender Mertesacker, who is set to retire next month but continue in a coaching role, has described an emotional reaction to the news.

"We have just been informed basically," the German, who has won three FA Cups, told Arsenal's official website. "It is quite emotional.

"Obviously he has been at the club for such a long time, he has been so supportive to me. One major reason why I'm here is because of him. It's been emotional and there will be time to digest it but it is a sad feeling right now.

to when I got that call from Arsene! My transfer to made me incredibly happy and proud to be part of this great club April 19, 2018

"He's been the major figure for this club for over 20 years. He's been so impressive for me and he's trusted me so much throughout my career, in bringing me here, giving me the opportunity to play here and making me captain, even when I was injured.

"He also gave me a future role here at the club, so I'm very grateful and humbled for the opportunity he gave to me.

"It is a sad day for me but we're also moving forward for the future. It's in Arsene's interest as well that this club will give positive memories to the fans and the people."