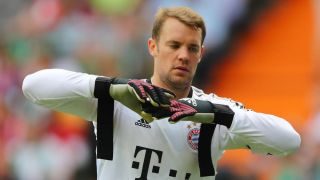 Bayern Munich goalkeeper Manuel Neuer has been playing with a metal plate in his right foot since 2008.

Neuer had an operation to repair a hairline metatarsal fracture in his left-foot last week.

The injury was a repeat of the one that sidelined him during the closing weeks of last season and he is expected to remain out until early 2018.

Nevertheless, the 31-year-old is not daunted by the setback, having suffered a similar injury to the other foot during his time with Schalke.

To this day, he still carries around a reminder of that surgery, which he views in somewhat pragmatic terms.

the mascot goes sightseeing in Paris! We can bear-ly wait for kick-off September 27, 2017

"I had the same injury while at Schalke in 2008," Neuer told Sport Bild. "Back then, a metal plate was inserted which is still in.

"I've never had a problem and feel comfortable with it.

"I'm all for leaving everything in during my career in order to avoid unnecessary absences."

Bayern face Paris Saint-Germain at the Parc des Princes in the Champions League on Wednesday and have added Tom Starke to their squad as cover, despite the veteran goalkeeper having retired at the end of last season to join the club's youth academy in a coaching role.